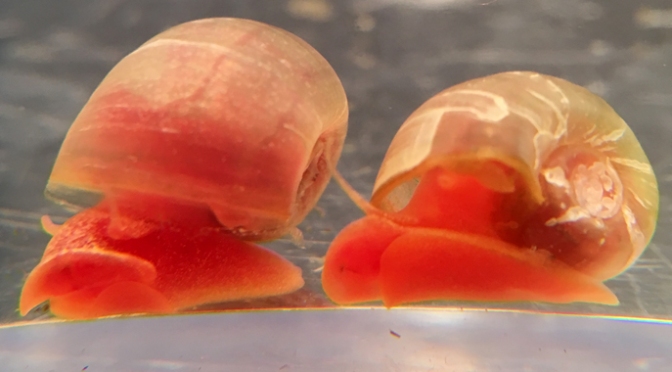 All land snails and aquatic snails have shells that are made up of calcium carbonate. Without enough calcium in their diet, their shells are thin and prone to fracturing. They also seem to need higher amounts of calcium to breed well.  Water conditions such as soft water or Ph swings can also cause shell erosion. For this reason all aquatic snails do better in hard water rather than soft.

The pink ramshorn snail on the left, in the photo above, had free access to calcium supplements in its aquarium. The snail on the right did not have access to the calcium it needed and the shell damage is obvious. 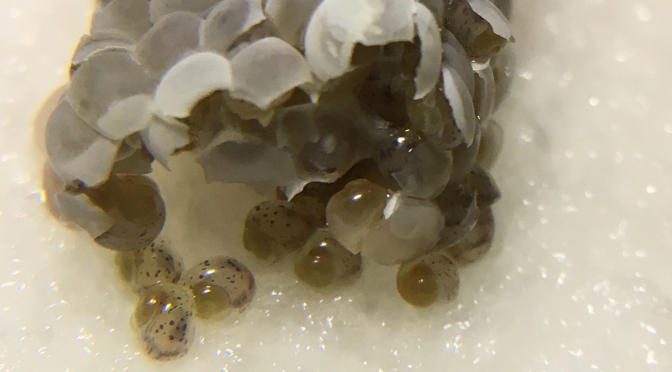 Mystery snail eggs can take anywhere from 10 days to 4 weeks to hatch. How long they take to hatch depends on different factors including temperature, humidity  and even size of the clutch (larger clutches take longer to break down causing it to take longer for the snails to be able to escape the eggs into the water.

My egg clutches are kept in a warm room so they typically hatch in 14 days. The eggs of two clutches were photographed each day until hatching so that you can see how they change over time. The most common question I hear is are my eggs fertile and do they look like they will hatch. 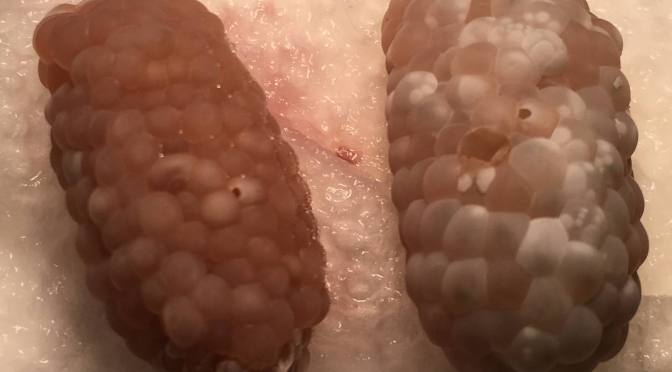 These two clutches were laid within 2 days of each other. The one on the left is “bad” or mostly if not completely infertile. See how the egg cells are small and not very bubble like? Two other tips on detection: 1) smell a clutch that you suspect is bad if it’s been at least two weeks. Infertile or bad clutches have a distinctive smell while healthy/fertile clutches do not. If the clutches are sitting on a damp paper towel, do you see a red/pink stain under one? Only infertile clutches will stain the paper towel. You can see in the photo above that the left clutch has stained the paper towel pink underneath it.

The one on the right is very fertile and it will likely hatch In the next day or two. It would still be necessary to wait a week to 10 days to be able to tell this as egg development is unclear until that much time has passed. About 3 days before hatching, a fertile clutch will start to change color to look moldy prior to hatch. You cane see the color changes in the Mystery Snail Egg Development page link below.  It takes anywhere from 10 days to 4 weeks for an egg clutch to hatch based on temperature and other conditions.

Join Florida Mystery Snails on BAND – see the growing snail babies that will be available soon.